Billy Graham’s daughter was interviewed on the Early Show and Jane Clayson asked her “How could God let something like this happen?” (regarding the attacks on Sept. 11). Anne Graham gave an extremely profound and insightful response. She said “I believe God is deeply saddened by this, just as we are, but for years we’ve been telling God to get out of our schools, to get out of our government and to get out of our lives. And being the gentleman He is, I believe He has calmly backed out. How can we expect God to give us His blessing and His protection if we demand He leave us alone?” In light of recent events…terrorists attack, school shootings, etc. I think it started when Madeleine Murray O’Hare (she was murdered, her body found recently) complained she didn’t want prayer in our schools, and we said OK. Then someone said you…

If and When: The Manson Dies

Will your problems be solved as far as the “Big Bad Wolf” is concerned? Will you be safe when, 66THE MOST DANGEROUS MAN ALIVE99 is dead? Will you have . . . the closure? Sharon’s sister wants?

Could your real life begin then, after the protagonist of your story is physically removed but even still: ALL-THE-WAY-ALIVE: in the Air, Tree’s, Water and Animals -that remain? Is it more important that infamous people die, then it is, that your country go GREEN? In the middle of the rainbow, is there no violence?

66Vengence is Mine99 saith the Lord.

TMZ,s Harvy Lavin has basically big banked his whole career on Charlie. The Western movie star/President’s son, Ronald Reagan Jr., and an unassuming Michal Ben Horin interviews of the Manson are the best yet to date when seeking the truth: https://www.youtube.com/watch?v=j0mF8dtGuuk&t=6s.

It has been rumored and reported that Ben Horin is approved for a new interview: @ 19:48 https://www.youtube.com/watch?v=1FT6kODsJbI. While death-clock-watchers are betting the Oldman won’t make it.

Now, if one Oldman, can go viral; every three months since 1969, its intended that this THING isn’t going to just go away withon the whims of a woman’s anger and profit sharing; nor the amounts of revenue one daytime drunken TV Lawyer can generate.

EYE DON’T BE LEAVE IN COINCIDENCE

The Manson has a boatload in common with the Tesla, who died sometime today or tomorrow in 1943. Wouldn’t be surprised if the Manson dies to love the sameday today or tomorrow. http://www.pbs.org/tesla/ll/ll_mispapers.html . http://dangerousminds.net/comments/kenneth_anger_and_the_manson_family_conspiracy_coincidence_syndrome_overloa

Eye hope not, yet, people like Manson and Tesla teach us things ahead of times. They give us things no one else will while wanting nothing in return. Historical icons of alien intelligence beyond your reasoning.

All the news Channels about wanting N.orth E.ast W.est S.outh . . . Property of California Corrections! Thy WILL BE DONE! NOT!!! They want the 66SLANT99 of what sells? Peace Sells, but who’s buying? COMPASSIONATE PARDON; do you have the will?

Now when 66murderbillia99 is the business and the business is so bad but sooooooo good . . . will the collectors cough it up for those inside the coffers coffins? For the chill’en? How does a kid feel when their parental figures lives are hijacked by the media and all its mongrels? Without will.

Acclaimed crime author Danial Simone attests in the links above; and hopes to publish not only a fictitious retrial of THE TRIAL OF THE CENTURY but would also like people to know that STAR . . . the woman who declared undying love for the enigma that is CHARLES MANSON . . . wants to sell tickets to see his dead body?

The Manson has shown a bad habit, not to excluded or denounce any who he has had bad relations with. Now when one, was a woman who he purportedly intended to marry walks away and the Manson says, 66Get my music from Star99.

Mayhap someone should have their ears on . . .

Oh, so your dead father’s lost all your inheritances to murderabilia collectors? I’m sorry. That sucks! Oh, you dad was so insane that he let the prison have his mortal remains and they made a sideshow circus around the buyers? I’m sorry. Your great-grand father was so far in-steeped into American Cultural History that your dad had no peace of mind and killed himself? I’m sorry.

Well you know, if he hadn’t set his will, so far against the capital of the market and product we produced out of nothing that sold children, sex and death like hot potatoes . . . if blood never looked so red shinny . . . we wouldn’t have been: 66not into temptation99; but would have asked for a ‘compassionate pardon’, if we could have been, 66delived from evil99; but . . .

via Give and Take — Jason “Fighting” Freeman’s Blog 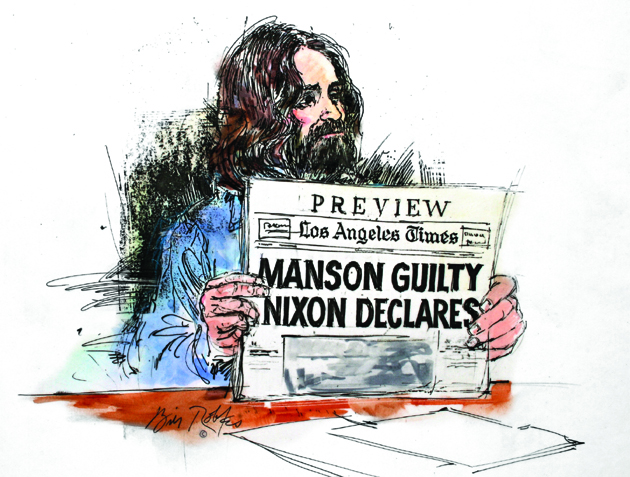 Matriarch -vs- Patriarch By Grandfather & Grandson Productions Part I Part II It’s Voting Time in America Again, Let’s Ask Manson… It is purely an American phenomenon, that almost every United States President, since 1969, starting with President Nixon has had either something infinitesimal or infinite to do with the convicted criminal Charles […]

via X Manson and The Presidency — Loud Alien Noize

Nobody, I’m Nobody! ”No Name” Maddox a.k.a Charles Manson will die one day. That day whether we like to admit it or not. Some sort of pop icon will die, the devil according to man…